Out in the cold in more ways than one. 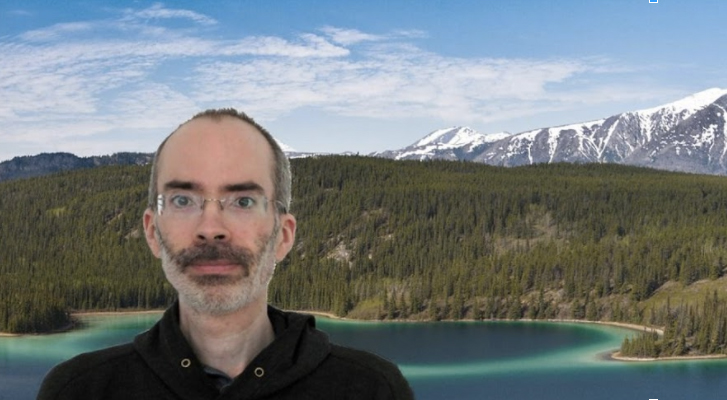 Before M.E. I was a computer programmer, web developer and a partner in a successful company. I enjoyed life and was physically active, walking at least 7 km every day. I could think clearly, write articulately, and work on sophisticated computer software.

My first experience with ME occurred in 2003 when I was struck with a very short flu-like illness. Initially I felt like I had quickly recovered but then realized that 50% of my energy had disappeared. At first I was optimistic and thought my energy would eventually return, but it hasn’t since that day fourteen years ago.

In 2004 I had the same flu-like illness and another permanent 50% reduction in my energy levels. I also started having the first symptoms of diﬃculty thinking clearly. This was frustrating because I highly value clear thinking. It was also key to my profession as a programmer. Foggy thinking started to impact my work and ability to properly perform my job.

My doctor had no idea what had happened.

“I was told, ‘Let’s wait awhile and see how you feel.’ I heard that message repeatedly for years.”

After some basic blood tests that didn’t show anything unusual I was told “let’s wait awhile and see how you feel.” I heard that message repeatedly for years: “Let’s wait”. But my body didn’t wait, it continued to decline.

By 2005 I started to work part time because my health was deteriorating. I became progressively worse with the slow but steady emergence of new symptoms.

Two years later I had to stop working entirely due to deep debilitating fatigue, and the severe inability to think clearly.

My last work project would have taken me 2 weeks to complete before ME, but instead took six months. This was embarrassing and very frustrating. I spent a great deal of time and energy trying to think of alternate means of employment but my developing symptoms presented one barrier after another.

Eventually I had to accept my many symptoms, the barriers they presented, and gave up the idea of being self-supporting in my life.

Now at the start of 2017 I have been housebound and partly bedbound for almost two years. I can’t stand up for longer than an hour because my body can’t keep my blood circulating properly. I can’t watch TV or listen to music due to sight and sound sensitivities. I am very sensitive to certain chemical fragrances which can cause multi-day headaches.

My body produces so little energy I am forced to live a severely restricted life of meeting basic needs.

I have to be very careful using my limited energy because my ME symptoms are so disabling that even a mundane task like taking a shower can cause my body to crash with severe fatigue and foggy thinking. If I attempted to walk even a quarter of the distance around a residential block I would be so exhausted that I wouldn’t be able to make it back home. The fatigue and even pain would last for days, or even weeks.

As someone who lives alone, on Social Assistance, I have to be very careful about managing my limited energy.

I have just enough energy to take care of myself with help from family who visit on most days.

My experiences with the Canadian medical system have taught me that doctors can be compassionate or abrasive, wise or ignorant, helpful or cause for despair.

My symptoms confuse doctors so much that they assume I have psychological problems and stop looking for solutions.

Or they see what they have been trained to see by their specialty and ignore signs and symptoms that don’t fit.

I have seen multiple MDs, three neurologists, a neuro-opthamologist, a psychiatrist (who said my problems aren’t psychiatric), and two alternative practitioners. None have been able to help me and most have left me feeling discouraged, especially one neurologist who told me three times in the same interview “I sure am glad I’m not in your position”

Do you have any idea how disheartening it is to wait nine months to see a specialist, feel optimistic that help will be available and then hear that statement?

The Canadian medical system is excellent in many ways but for someone with ME it’s a disaster. I have spent years on waiting lists to see specialists. While waiting I have used my very limited energy to document and present my symptoms as clearly and concisely as possible, only to have doctors refuse to do any more than glance at my carefully prepared notes and send me away feeling discouraged with and by the health care system.

Doctors…send me away feeling discouraged with and by the health care system.

I am sorry to report that the only gains in my health have come from self-experimentation and learning from others’ experiences, not from physicians or our health care system. I have had to become my own doctor with the amazing help from other people in the ME community who research, experiment, and share their results. This is a slow process because research and self-care is frustrated by disabling fatigue, sensitivity to light from computer monitors, and diﬃculty thinking clearly.

This is an illness that forces a person to adjust to a new, very restricted way of living. I used to walk for miles through forests but now I can only look at trees outside my window while lying in bed.

I used to program computers but now even basic math is diﬃcult. Passive activities like watching TV or listening to music are not possible because sight and sound sensitivities rapidly exacerbate my symptoms. Even talking tires me and too much becomes a disabling strain on my body and mind, greatly limiting the enjoyment of talking with my family.

My list of symptoms is so long that it would take an exhausting hour to discuss them all.

A few more examples include low body temperature and feeling the pain of cold (not a good thing in the Yukon), having to avoid excessive heat because it lowers my already low blood pressure, diﬃculty speaking clearly and finding words, and rapid muscle fatigue that is sometimes so bad that I experience lactic acid burn in my tongue when chewing. That may be hard for you to imagine, but that is my reality and how extreme my symptoms are.

I’ve been out of this house once in the past 18 months to see how I felt traveling around the block in my sister’s vehicle. I was so unbalanced I had to lie down immediately because of severe orthostatic intolerance and low blood pressure.

Very few doctors understand a complex disease like ME and most are ignorant of the diverse array of symptoms. They don’t understand the extreme suﬀering that a patient endures from the disease itself, and from the doctors who are supposed to help us.

Do you want to share your own story? Email us!